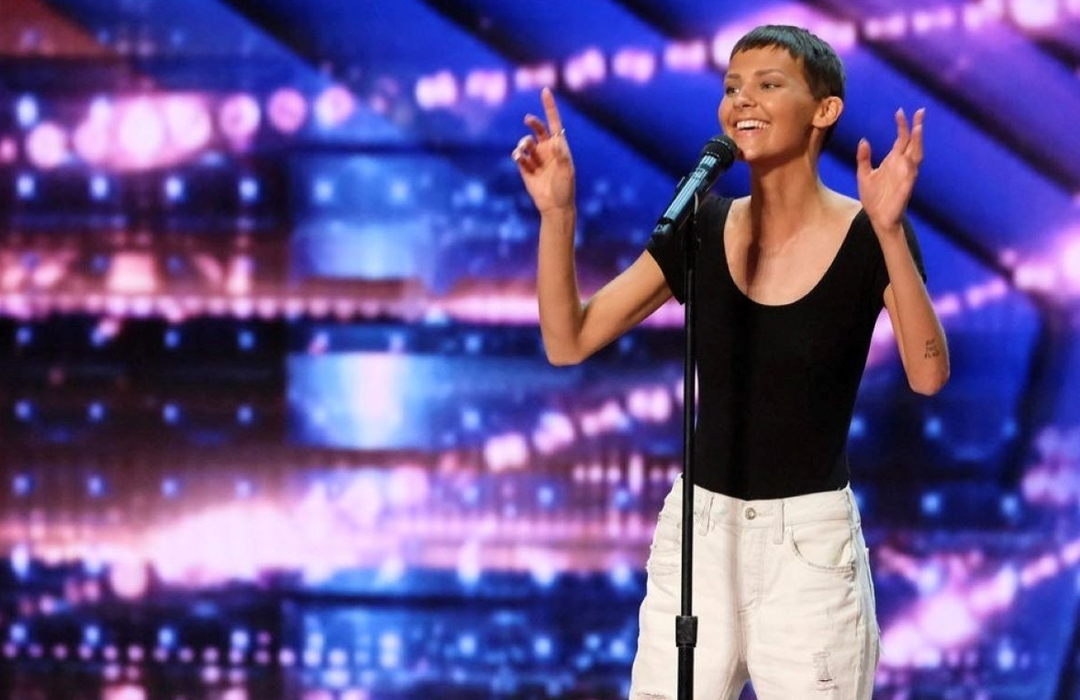 I am not one for consuming much of pop culture.  Much of the stuff I consume was written at least one hundred years ago.  Without pretension I often find it difficult and challenging to find meaningful content created by people today that taps into larger questions of life, the questions of transcendence and showing us that perhaps there is more to life than merely our skin and bones.  As our world becomes increasingly materialistic and secular, and our schools becoming more STEM based and quietly leaving the arts behind, it is becoming more difficult to find true art in modern times.

Enter, surprisingly, America’s Got Talent.  I, along with millions of Americans, stumbled upon the clip of Jane, known as Nightbirde, singing “it’s OK.”  If you have not seen the clip, please watch it below:

For obvious reasons, this is a profound moment to watch.  But what is most profound for me is the moment when she finishes singing – and almost shyly steps back from the microphone.

For nearly five seconds, the entire room is in a emotional and reflective silence.

As a wanna-be-artist-now-become-pastor who enjoys music, paintings, literature, and the like, you look for those moments where what you or someone else produce that allows them to feel or see something beyond themselves, or even beyond this world.  That is (or, rather should be) the purpose of creating beautiful art.  It brings you to thoughts and feelings and ponderance of transcendence.  And in doing so, you might find pebbles directing you towards a pathway of truth, of rescue and salvation of humanity – what I argue is only truly found in Jesus, God-incarnate.

As Dostoevsky, influenced by his love and understanding of Jesus and Christianity, once said “Beauty will save the world.”

In an unexpected pop-culture show designed for entertainment and the showcasing of people’s talents, the audience was hit by surprise and lunged into a moment where they were able to, through the work of art, share in someone’s suffering and even feel someone’s suffering, while witnessing Jane smile and almost giggle throughout her performance.

For almost five seconds when she was done, the entire room went to silence.  That is what art is supposed to do.

How is it possible that she had such joy?  And with her simple lyrics, “It’s OK,” they were invited to consider for just a moment times in their own life when they could relate – and immediately challenged by the thin, cancer-ridden yet joyful woman in front of them.  Somehow, even for the millions who have viewed it, they saw something more than just a suffering woman.

BEAUTY WILL SAVE THE WORLD

Alexander Solzhenitsyn, upon receiving the Nobel Peace Prize in 1970, gave a speech in which he contemplated on Dostoevsky’s statement, that Beauty will save the world.

“What sort of a statement is that?” said Solzhenitsyn. “For a long time I considered it mere words. How could that be possible? When in bloodthirsty history did beauty ever save anyone from anything? Ennobled, uplifted, yes – but whom has it saved?”

“There is, however, a certain peculiarity in the essence of beauty, a peculiarity in the status of art: namely, the convincingness of a true work of art is completely irrefutable and it forces even an opposing heart to surrender.”

He moves on, thinking through the convincing and even truthful and polemical nature of art and when it presents something of true beauty to its audience:

“… a work of art bears within itself its own verification: conceptions which are devised or stretched do not stand being portrayed in images, they all come crashing down, appear sickly and pale, convince no one. But those works of art which have scooped up the truth and presented it to us as a living force – they take hold of us, compel us, and nobody ever, not even in ages to come, will appear to refute them.”

He then finishes with the profound thought,

“So perhaps that ancient trinity of Truth, Goodness and Beauty is not simply an empty, faded formula as we thought in the days of our self-confident, materialistic youth? If the tops of these three trees converge, as the scholars maintained, but the too blatant, too direct stems of Truth and Goodness are crushed, cut down, not allowed through – then perhaps the fantastic, unpredictable, unexpected stems of Beauty will push through and soar TO THAT VERY SAME PLACE, and in so doing will fulfil the work of all three?

In that case Dostoevsky’s remark, “Beauty will save the world”, was not a careless phrase but a prophecy? … And in that case art, literature might really be able to help the world today?”

And music… if I can add.

Joy in suffering reveals a truth that is not easily accessible in our own human strength.  We need divine help.  When we see such joy, it is beautiful.  And when true beauty is found, truth is found.  Perhaps, America, what you are seeing when you watch that clip is not just an overly optimistic woman in suffering who is hoping for the best.  Rather, you just might be witnessing someone who has met God in profound ways through her suffering.

And it turns out, that is the case.

Feel free to read the brief interview here, but Christian author Ann Vosk interviewed Jane as she shared more details of her story.  And this is what Jane had to say when she reflects on her life of prayer throughout her years of suffering,

“I remind myself that I’m praying to the God who let the Israelites stay lost for decades. They begged to arrive in the Promised Land, but instead He let them wander, answering prayers they didn’t pray. For forty years, their shoes didn’t wear out. Fire lit their path each night. Every morning, He sent them mercy-bread from heaven.

I look hard for the answers to the prayers that I didn’t pray. I look for the mercy-bread that He promised to bake fresh for me each morning. The Israelites called it manna, which means “what is it?”

And I learn a new prayer: thank you. It’s a prayer I don’t mean yet, but will repeat until I do.”

After describing her emotional bouts of struggle on the bathroom floor, the interview ends with Jane stating,

I have heard it said that some people can’t see God because they won’t look low enough, and it’s true. Look lower.

God is on the bathroom floor.”

All of this reminds us of the God-Man Jesus, who was humble enough to stoop himself down to the lowest of lows, “with the joy set before him” (Hebrews 12:2) went to the cross, to suffer – for the sin of others in order that we may be forgiven and healed.  And has provided us divine access by his Spirit to tap into such heavenly contentment in our suffering that is not found in this world as we look forward to the age to come where suffering and pain and death will be no more (Revelation 21:1-5).  That is the beautiful Good News of Jesus Christ.

In conclusion, it was in the five-second silence of that room that the audience was challenged with seeing something beautiful come in an unexpected place.

Perhaps, after all, Dostoevsky was correct: Beauty will save the world.

Scouting Out The Vineyard Movement: What's in Store for Immanuel?